Joel Bakan reveals the astonishingly callous and widespread exploitation of children by profit-seeking corporations, and also society’s shameful failure to protect them. Bakan shows how corporations pump billions of dollars into rendering parents and governments powerless to shield children from a relentless commercial assault designed solely to exploit their unique needs and vulnerabilities. 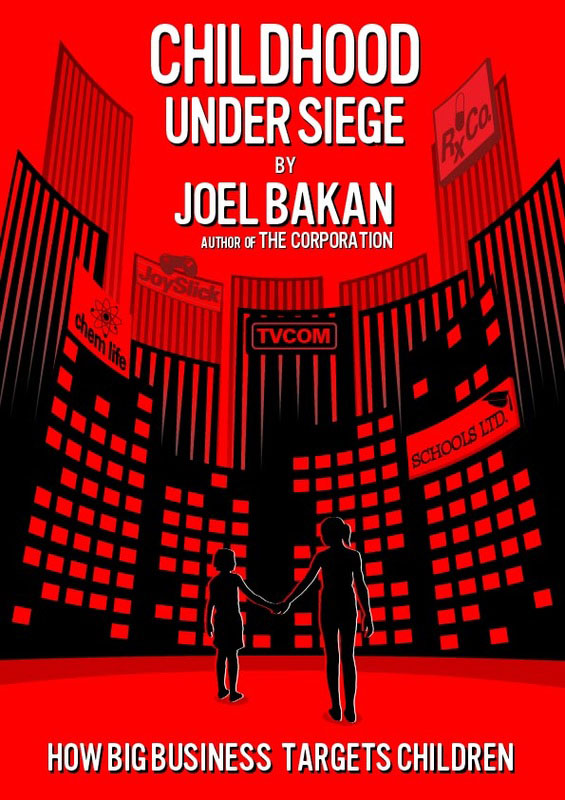 "Stunning....The book sounds alarms about issues that go under most parents' radar."

"painfully dissected in this penetrating study... It can be resisted "

"Read this important book and then start working for change."

Corporations have a new resource to mine for profit: our children

In Childhood Under Siege: How Big Business Targets Children (Free Press/August 9, 2011/$26.00 hardcover),and focusing on the United States in particular, Bakan demonstrates how:

“As governments retreat from their previous roles of protecting children from harm at the hands of corporations,” Bakan writes, “we, as a society, increasingly neglect children’s needs, expose them to exploitation, and thus betray what we, as individuals, cherish most in our lives.”

Childhood Under Siege is a call to action to reverse these trends, and provides the necessary insights, information, and concrete proposals to do so.

“Joel Bakan’s powerful, well-documented polemic is just what we need to hear right now, if we are to even begin to reverse the toxic consumerist legacy we are bequeathing to future generations.”

“The information in Bakan’s book is…stunning….The book sounds alarms about issues that go under most parents’ radar.”

author of Queen Bees and Wannabees

“Childhood Under Siege” is an essential read for anyone who works for or cares about children because we simply can’t advocate for and teach them effectively if we don’t know what we are up against. As a mother and a teacher, it was sometimes overwhelming to read this book, but for my own work and parenting I forced myself to keep going. At times it was deeply frightening–and I do media literacy training as part of my work. It’s very simple: If you want to be relevant in a child’s life, you need to read this book.”

author of The Shelter of Each Other and Seeking Peace
“Childhood Under Siege” outlines the powerful strategies at play in the corporate war against children. This engaging, carefully researched and important book is a call to action to those who believe we have a responsibility to protect all our children with our laws and public policies as well as our hearts.”

“The assault on childhood in our corporate-dominated and profit-driven society, painfully dissected in this penetrating study, is a tragedy not only for the immediate victims but for hopes for a better future. It can be resisted, as Joel Bakan discusses. And it is urgent not to delay.”

author of Consumed: How Markets Infantilize Adults, Corrupt Children and Swallow Citizens Whole
“Our new century of unlimited private profits has put an end to the era of publicly protected childhood. Separated by corporate design from their parents, kids have become capitalism’s newest, most lucrative, consumers. Joel Bakan offers an angry but careful analysis of how the market flourishes today by selling our children everything from dangerous drugs, toxic plastics and unhealthy snack foods to violent and addictive video games and for-profit standardized tests. If they read Bakan carefully, once they get over their rage, both parents and policy makers may be ready to lift the corporate siege that is threatening not just our children but childhood itself.”

Educational Psychologist and author of Different Learners: Identifying, Preventing, and Treating Your Child's Learning Problems
“Childhood Under Siege” is a compelling call to arms in the covert war for our children’s minds, health, and future. Joel Bakan empowers us all to stop lamenting the destruction of childhood and do something to rescue it.”

Co-Founder, The David Suzuki Foundation
“To be a child today, even in affluent countries like ours, is no longer a time of innocence, idyll and discovery, as Bakan reveals in “Childhood Under Siege”. Most children today grow up on a planet in which billions of tons of toxic chemicals have been poured into the air, water and soil; in a big city where the opportunity to encounter nature has been replaced by concrete, fast cars, video games and shopping malls; in a world in which childhood represents a marketing challenge and opportunity. Read this important book and then start working for change.”

author of In The Realm of Hungry Ghosts: Close Encounters With Addiction
​”In ‘Childhood Under Siege’, Joel Bakan documents and depicts a modern disaster-in-the-making as ominous as our society’s assault on the natural environment: the social and economic destruction of the conditions for healthy childhood. An eloquent and prophetic work we need most urgently to heed.”

“Bakan offers passionate argument and copious research in this compelling call for parents to stand up for their children.”